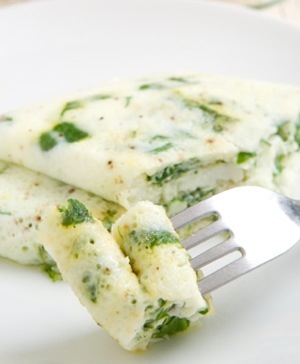 The other day I went to a cafe that I often visit and ordered an omelette, which is what I typically order there. A few minutes later the gentleman behind the counter brought out my plate, complete with an egg white omelette. Knowing I’m a trainer and interested in health he had ordered up egg whites by default. “Uh-oh” he said as he realized his mistake, “I just did that out of habit because you guys (meaning other trainers) usually get egg whites.” Noticing my disappointment in the missing yolks, he apologized and had a regular omelette made. So often I hear the assumption that eating healthy means forgoing the yolks. This last instance inspired me to share my thoughts on the matter…

Most simply put, the yolk is the most nutritious part of an egg. The white has little going for it and may even be a problem for some people. Forgoing the yolk makes no sense, practically. Never, in nature, would an animal crack open an egg, suck out the white and leave the yolk. The yolk is the prize. Protein, fat, cholesterol, vitamins, minerals. Egg yolks are a superfood. 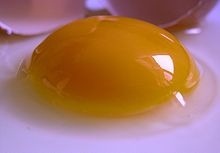 Let’s take a closer look at the nutrition… 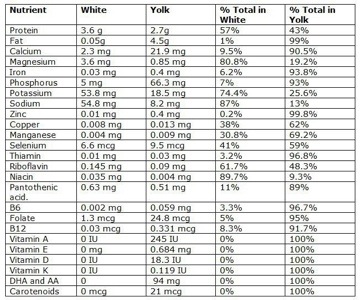 (Graph courtesy of Chris Masterjohn’s article from cholesterol-and-health.com. Check it out for more on the incredible egg yolk.)

Look at the two right columns. What jumps out at me is how nutrient dense the yolks are and how nutrient moderate (at best) the whites are. Egg whites have just slightly more protein than the yolks, which shocks nearly everyone who hold the conventional belief that egg whites have all the protein in the egg. The whites are the main source of magnesium, potassium, sodium, riboflavin and niacin and have a some copper, manganese and selenium. But the yolks steal the show. Protein, all the fat (including DHA) and fat soluble nutrients, and nearly all of all the other vitamins and minerals. The yolk makes an egg what it is. The whites are literally just a vessel for the yolk. Additionally, the main allergen in eggs is in the protein, which would mean eating egg whites is in essence just eating the allergen without the buffer of the rest of the egg. Many people who are “allergic” to eggs can tolerate the yolk but not the whites.

Doesn’t it make you wonder why restaurants charge more for egg whites?

Not to mention, just from a taste perspective, the yolk is where the flavor is. Skipping the yolk means skipping out on flavor. An egg without flavor is pointless. Egg whites are one of the more foolish dietary practices we humans have ever created. All from a little fear over cholesterol and saturated fat. I find it quite interesting that limiting egg consumption hasn’t really helped us get any healthier or lower our cholesterol and it may have even left us missing out on some really nutritious food that could have helped us. Live and learn. And eat those yolks.

The Bare 5 Bottom Line:
Eat the yolks. They are a superfood and will NOT harm you.

So next time someone you know makes or orders egg whites, ask them if you can have their yolks.

Thanks for reading, have a great yolked day!

P.S. If you still think eating eggs raises your cholesterol then let me know because there’s plenty of research showing that not only to be a false belief but possibly be backward. Then if you still don’t believe me, get your cholesterol checked, eat a couple eggs a day for a couple months and retest. A client of mine just took the challenge and you can guess how it turned out…

P.S.S. If you still think that eating eggs is bad because they have (bad) saturated fat let me know because there is another myth that has been busted…