Bacon vs. Beets – which is healthier?

Most people say beets. They’re probably right. What about this question:

Bacon vs. Beets – are beets healthier because they have less nitrates?

Most people say yes, but they would be wrong…

Bacon, hot dogs, deli and other cured meats are often made with food preservatives called nitrates (or nitrites) that doctors and health gurus warn us constantly to avoid because they’re “bad for us”. Before we ban those foods because of the nitrates or pick the “nitrate free” versions, let’s take a look at what nitrates and nitrites are, what they do in the body, how much these products actually contain and finally, compare that to a few other common foods that people don’t think of when the word nitrate comes up.

What Biological Function Do Nitrates/Nitrites Have?
Nitrates are organic compounds, mostly ingested via food or water, that are broken down in the digestive tract, primarily by saliva, into nitrites. Nitrites are then broken down into nitric oxide. NO is one of the primary signaling messengers for the blood vessel muscles to relax, which increases blood flow and reduces blood pressure.

Eat NO3 → saliva turns into NO2 → digestion enzyme turns NO2 into NO → blood vessels absorb and relax.

This biological process and dynamic is why nitrates and nitrites are now being considered to be a very good thing for our health and are being used to treat hypertension and improve athletic performance.

Where Do We Get Nitrates/Nitrites?
Although we produce a majority inside our own body, most of our dietary nitrate exposure comes from vegetables. Contrary to popular belief, bacon is a very poor source of nitrates, about 1/20th that of beets, 1/18th of celery and 1/7th of broccoli. This sampling of foods shows that cured meats are lower than nearly all vegetables and plants, with the exception of some fruits.

*A few other lettuces and vegetables contain even higher levels of nitrates but are not commonly eaten, particularly in the United States.
**Three different tables can be seen at the end of the post.

The Bottom Line on nitrates and nitrites:
Bacon, hot dogs and deli meats should not be thought of as a source of nitrates and nitrites. Whether you eat bacon and hot dogs or not is your decision, but I wouldn’t base that choice on nitrates/nitrites. It is becoming more apparent that if anything, we might want to embrace nitrates and search out dietary sources of them instead of being fearful of and avoiding them. Time for a spinach and arugula salad sprinkled with bacon. Maybe a little beet juice to wash it down. 👍

A couple of notes:
– Meats cured with celery (i.e. “nitrate free”) contain more nitrates/nitrites than those cured with sodium nitrate/nitrite.
– Nitrites are now being heavily investigated as an anti microbial substance.
– Vegetables make us healthier- could part of the reason be the nitrates? Popeye used to eat spinach to get his muscles pumped and strong- looks like he was a bit ahead of the research…

Food sources of nitrates and nitrites: the physiologic context for potential health benefits 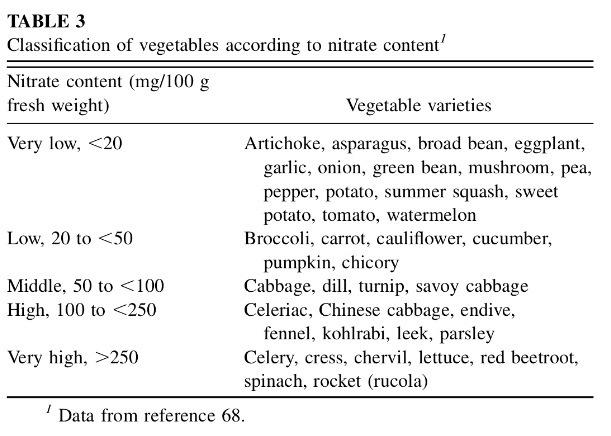 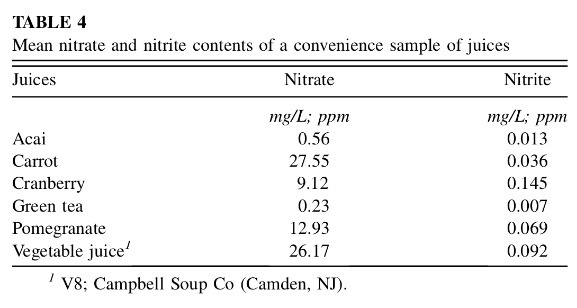 P.S.S. Here’s the full scene for those office lovers…