Is Cholesterol Finally Off The Hook?

Fun February Facts: Feb 21st is National Cook a Sweet Potato Day, was the day the first self-propelling steam locomotive makes its outing at the Pen-y-Darren Ironworks in Wales in 1804, John Greenough was granted the first U.S. patent for the sewing machine in 1842, Karl Marx and Friedrich Engels published The Communist Manifesto in 1848, the first telephone book was issued in New Haven, Connecticut in 1878, the newly completed Washington Monument was dedicated in 1885 and is the birthday of David Geffen, American film and record producer (co-founded DreamWorks and Geffen Records) in 1943.

Ok, back to cholesterol… 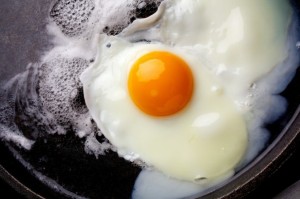 It hit the newswire last week: The U.S. government is poised to withdraw longstanding warnings about cholesterol. Finally, you can have eggs and bacon and all the other delicious cholesterol rich things we have been giving up all of these years. An interesting turn of events which (as many of you know ad nauseum) I’ve been telling you was coming for a few years and some people have been saying for decades. It probably should’ve been in the works a long time ago but things take time, particularly in nutrition.

A couple things:
– So far all we know is that supposedly they are going to relax the guidelines based off of the report from a meeting that happen in December. We don’t even know what this report actually says or if it will have any impact on the actual dietary guidelines the government publishes. This won’t be known  until later in the year when the official 2015 US Dietary Guidelines are released. Until that actually happens I’m not gonna get my hopes up that they have changed their mind on anything.

– They guidelines are apparently still going to make the recommendation that you need to be “careful” if you have diabetes or pre-existing heart disease. Then don’t eat more than that one egg per day. This makes sense when you think about where they’re coming from but probably doesn’t even matter either.

– This report is only about dietary cholesterol also has nothing to do with blood cholesterol levels in your body (which is a whole different issue). Those guidelines should be taken back or “adjusted” in another 5 to 10 years, so have patience.

– There is a small percentage of the population (some claim up to about 25%) that does seem to have their blood cholesterol impacted by eating cholesterol. I will not argue against this but I instead will ask two questions: Does it even matter? and Why does it happen? Instead of simply saying “be careful” about eating too many eggs, steak or shrimp, we need to figure out if it even matters that their blood cholesterol goes up from eating too much and if so why is that population affected differently? Looking for the root cause or, what I think is the more the adaptive cause is where the answers lie.

So that’s where we stood as of me writing this earlier in the week.

Then Thursday this came out:

This is the report I referenced above that we were hearing those rumors of. What does it actually say? What recommendations are all of our scientists making to the HHS and USDA to formulate the new Dietary Guidelines?

I didn’t read the whole 571 page report but glanced through it and read several synopses of the massive document. The sad thing is it doesn’t appear to be anything terribly new. The same basic nutritional things, that haven’t really been working, are still there. There were a few positives in that there was a little less emphasis on fat being a problem (but saturated fat is still shunned in favor of vegetable oils), cholesterol was pardoned (mostly) and the criticism enhanced a bit on added sugar (which is probably a good thing). Additionally, it seemed the report wanted to emphasize moving away from focusing on individual nutrients and more onto concepts or patterns of eating, which is a big positive in my book.

Thanks for reading, go enjoy those eggs!