Fun February Facts: Feb 20th is the World Day of Social Justice, the day George Washington signed the Postal Service Act in 1792 (establishing the United States Post Office Department), the Metropolitan Museum of Art opened in New York City in 1872, Tchaikovsky’s ballet Swan Lake received its première performance at the Bolshoi Theatre in Moscow in 1877, aboard Friendship 7 John Glenn became the first American to orbit the earth in 1972 (making three orbits in 4 hours, 55 minutes) and is the birthday of Ansel Adams, American photographer, in 1902.

Ok, back to this guy named Francis…

In going through Fabulous February I came across a guy named Francis Galton, who’s birthday was on the 16th. I was so impressed with him I not only made him the Feb 16th famous birthday representative but I ended up researching him in a bit. What I found was pretty neat (at least by my standards) so I thought I would share the quick story of Francis Galton. 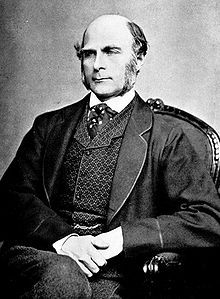 I started to write up my own bio before quickly realizing the one from Wikipedia works just fine:

Galton produced over 340 papers and books. He also created the statistical concept of correlation and widely promoted regression toward the mean. He was the first to apply statistical methods to the study of human differences and inheritance of intelligence, and introduced the use of questionnaires and surveys for collecting data on human communities, which he needed for genealogical and biographical works and for his anthropometric studies.

He was a pioneer in eugenics, coining the term itself and the phrase “nature versus nurture”. His book Hereditary Genius (1869) was the first social scientific attempt to study genius and greatness.

As an investigator of the human mind, he founded psychometrics (the science of measuring mental faculties) and differential psychology and the lexical hypothesis of personality. He devised a method for classifying fingerprints that proved useful in forensic science. He also conducted research on the power of prayer, concluding it had none by its null effects on the longevity of those prayed for.

As the initiator of scientific meteorology, he devised the first weather map, proposed a theory of anticyclones, and was the first to establish a complete record of short-term climatic phenomena on a European scale. He also invented the Galton Whistle for testing differential hearing ability.

He was cousin of Douglas Strutt Galton and half-cousin of Charles Darwin.

Wow. Francis Galton was a very busy, eclectic and pioneering guy, particularly in the world of science, and I had never heard of him before a couple days ago. The guy who created statistical correlation and using questionnaires/surveys for collecting data on human communities. Those two things are what most of our science, particularly in nutrition and health, is based on. The foundation of almost all big health data we have about humans comes from data gathered by questionnaires and surveys and then correlating that to health/disease outcomes. In essence, much of what we think we know about health, nutrition and the human body stands upon the statistical methods he developed and pioneered.

His connection with Charles Darwin is another fascinating piece, whose work helped shape Galton’s work genetics and evolution. He was fascinated with and a pioneer in the field of improving the genetic quality of human population, which he named eugenics. Most of us know this concept from the extreme version popularized by Hitler and the Nazis. He also coined the phrase “nature vs. nurture” and was a leader in developing and exploring this concept. To this day, I and many others look at the world, health in particular, through this genetic vs. environment lense.

I just think about my experience with health and how prominently nature vs. nurture frames things for me and how much I deal with health data that has been established by correlation and the use of questionnaires. Those two things are almost everywhere in my day to day health philosophical life. If that was all he was responsible for I would be impressed. But, as described in the above bio, he was a touch busier than most people. I just had no idea how eclectic and foundational some of his contributions and ideas were until I read a bit more about him. Galton was one of the world’s great polymaths, “a person of wide-ranging knowledge or learning.” Basically, the guy was a pretty amazing all around thinker and intellectual with quite a long list of merit…

Some of his major scientific contributions:

– A severe nervous breakdown altered Galton’s original education goals. He elected to take a “poll” (pass) B.A. degree, like Charles Darwin also did. (Following the Cambridge custom, he was awarded an M.A. without further study, in 1847.) He then briefly resumed his medical studies.

– The death of his father at age 22 left him financially independent but emotionally destitute and he terminated his medical studies entirely, turning to foreign travel, sport and technical invention.

– He was an accomplished Free Mason.

– He became very active in the British Association for the Advancement of Science, presenting many papers on a wide variety of topics at its meetings from 1858 to 1899. He was the general secretary from 1863 to 1867, president of the Geographical section in 1867 and 1872, and president of the Anthropological Section in 1877 and 1885. He was active on the council of the Royal Geographical Society for over forty years, in various committees of the Royal Society, and on the Meteorological Council.

– In 1888, Galton established a lab in the science galleries of the South Kensington Museum. In Galton’s lab, participants could be measured to gain knowledge of their strengths and weaknesses. Galton also used these data for his own research. He would typically charge people a small fee for his services.

– During this time, Galton wrote a controversial letter to the Times titled ‘Africa for the Chinese’, where he argued that the Chinese, as a race capable of high civilisation and (in his opinion) only temporarily stunted by the recent failures of Chinese dynasties, should be encouraged to immigrate to Africa and displace the supposedly inferior aboriginal blacks.

– Galton suggested in a letter to the journal Nature a better method of cutting a round cake by avoiding making radial incisions.

– In an effort to reach a wider audience, Galton worked on a novel entitled Kantsaywhere from May until December 1910. The novel described a utopia organised by a eugenic religion, designed to breed fitter and smarter humans. His unpublished notebooks show that this was an expansion of material he had been composing since at least 1901. He offered it to Methuen for publication, but they showed little enthusiasm. Galton wrote to his niece that it should be either “smothered or superseded”. His niece appears to have burnt most of the novel, offended by the love scenes, but large fragments survived.

– His statistical heir Karl Pearson, first holder of the Galton Chair of Eugenics at University College London (now Galton Chair of Genetics), wrote a three-volume biography of Galton, in four parts, after his death (Pearson 1914, 1924, 1930).

– The eminent psychometrician Lewis Terman estimated that his childhood IQ was on the order of 200, based on the fact that he consistently performed mentally at roughly twice his chronological age. (This follows the original definition of IQ as mental age divided by chronological age, rather than the modern definition based on the standard distribution and standard deviation.)

– The flowering plant genus Galtonia was named in his honour.

– Over the course of his career Galton received many major awards, including the Copley Medal of the Royal Society (1910). He received in 1853 the highest award from the Royal Geographical Society, one of two gold medals awarded that year, for his explorations and map-making of southwest Africa. He was elected a member of the prestigious Athenaeum Club in 1855 and made a Fellow of the Royal Society in 1860. His autobiography also lists the following:

Now that was one busy guy.

P.S. Here’s the Wikipedia page for Galton, which gets into more detail and offers many more references to follow if interested.