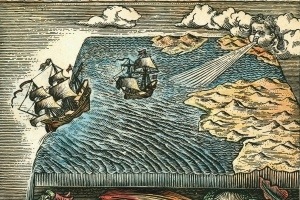 We thought the world was flat not that long ago. Now we snicker at how foolish that was. We have a bad habit that we don’t seem to learn any lessons from. We laugh and scoff at how past humans got simple and obvious things wrong and how foolish we were to think that. Yet we seem oblivious to the fact that that same thing is probably happening now. We are living in a world where we likely have our version (or versions) of the Flat Earth Syndrome. Unfortunately, just like our predecessors, we don’t realize how wrong and potentially foolish we are until we figure we are wrong. What thing(s) are we Flat Earthing? Only time will tell.

Don’t get caught up in thinking we are immune from the same mis-thinking that plagued people before us.

There are likely more things than we would ever be able to guess, that we take for granted as truth right now, that future people will look back at the year 2013 and chuckle at how silly those early 21st century humans were…

“What?! People used to think cholesterol would give you a heart attack??!! You must be joking…”

Thanks for thinking, have a great day!