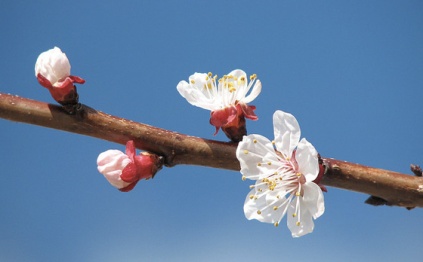 In the natural world, things usually don’t happen quickly. Gradual, slow, steady change is the way of most things we are surrounded by. Ever so slowly, the seasons change. Ever so slowly, trees grow and after time, flowers blossom and fruit emerges. Ever so slowly, little animals grow up. Ever so slowly, things evolve and change. Granted, there’s always exceptions to the rule and in the technologically advanced societies around the world we almost expect everything to change quickly and often contrary to it’s natural course. No matter the pressure we feel it’s important to remember that life happens little by little and things take time. When we think about making health changes we should think the same- slow and gradual change.

Just as summer doesn’t just become winter and the days don’t go from long to short in a day or even a week or month, it takes time to change. You can’t lose 15 pounds or completely overhaul your lifestyle overnight. It takes time. The journey toward getting healthier, such as taking up a more naturally based lifestyle, is often a big change and is best done gradually. Little by little, one step or change at a time and before you know it, big changes have occurred almost without notice or hassle.

In a world of conveniences and disconnected lifestyles that have infiltrated and controlled our consciousness, most people are not necessarily going to like getting back to natural behaviors. Nobody necessarily likes giving up processed snacks, sweets and late night TV but limiting it little by little is doable. Nobody necessarily likes running around barefoot or taking up an exercise routine when they’re not used to it. Nobody necessarily even likes change, particularly if it means doing something out of the ever so easy comfort-zone. But if we can think about change as a calm, simple evolution, trending in the right direction, one step at a time will get us further than we ever thought was possible. Think of how the sun changes over the course of the winter to spring to summer. Every day the sun only rises a a few minutes earlier, floats a few degrees higher in the sky and sets a minute or two later but with many days, weeks and months it’s shining brighter, hotter and hours more, creating a completely different feel and environment. No single day or even week seems like that big of a change but the cumulative effect is huge.

This is how health should change. Not overnight or even in a few days, week or month. Think of how we treat change now:

Stop watching so much TV, stop eating sugar, stop sitting down in front of a computer all day, stop eating fast food and soft drinks, stop eating this and stop doing that. And stop it now, no, yesterday! And while you’re at it-  get outside and exercise, go barefoot, move your body more, run, lift weights, get more sun (but not too much), eat more vegetables (especially kale), eat more of this, do more of that. And do it now, or by Monday at the latest.

Think of the pressure that puts on you to change your whole world and dramatically at that. That’s not natural and we shouldn’t expect it to be. It’s hard to change if you do it quickly because everything in your mind and body will fight you to return to what it knows as normal. It’s a lot easier to change if you take your time, go little by little and allow yourself to adapt to the gradual, natural and balanced seasons of change.

Don’t try to change winter into summer overnight. Find little things you can do that, although may not even seem big enough to matter, add up to a lot over time. Turning on the TV just a few minutes later or turning it off a few minutes earlier each day may not seem like much but it adds up over a season. Walking a few more steps or doing a few more minutes of movement each day adds up. Having a a few less ounces of soda or eating just a one fewer fast food meal a week may not seem like much but it, like everything else, can be a little by little thing that adds up to one big season of change.